We are including in or website Heart of Jesus the writings of other significant Catholic authors, who address the issues of today. Among these is a contemporary confessor of the Church, Josyp Terelya, whom Heaven has used powerfully with prophetic visions about these are times. 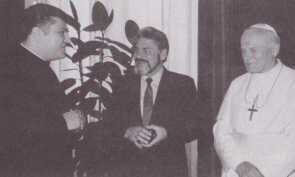 Josyp Terelya was born to the scions of ancient aristocratic Ukrainian Catholic families, Myhajlo Pojda and Margaret Falys, on October 27, 1945 in the heart of the Ukrainian Carpathian Mountains. The Russian armies had rolled into western Ukraine and Transcarpathia, imposing their Soviet regime and atheistic communism on the people. Myhajlo and Margaret had already joined the ranks of the communist overlords. Josyp had been adopted by his paternal grandmother, and carries her maiden name, Terelya shortly after his birth. He grew up in the underground Catholic Church.  With the death of both sets of grandparents he returned to his parents home. Here began the confrontation between his Catholic religious faith and the atheism of his parents.

This marked his life. Divine Providence had chosen him for his life mission to be a witness to Christ and the Catholic Church. His early training in the underground was completed in Soviet prisons and lagers in the 22 years, for months and five day of his imprisonment. It was in this period that the Blessed Virgin Mary appeared to him in the Vladimir prison in Moscow in 1970 and 1972, outlining to him his future destiny as a witness of Christ. He saw the Virgin again in Hrushiw in May, 1987. In September of that year he was exiled to the west.

He lives now in Toronto with his family. His life here is a constant witness to his faith. He began addressing Marian conferences in Pittsburgh, Pa. and Colorado. Following the Pueblo conference he addressed several groups in Denver. Tuesday, October 22; Josyp gave a talk at the Church of St. Bernadette in Denver, Colorado. He made two prophetic statements: "It is from this shrine that the renewal of religious life in America is to come through the renewal of family life." "In a short time, these hills will be trekked by thousands of young feet." I was reminded of these words two weeks later by a local American journalist who was researching the alleged apparitions of the Blessed Virgin Mary to Teresa Lopez and two young children on Sunday, November 10,1991, at the Cabrini Shrine.

I visited Josyp the next day, November 11, to verify the events of October 21. He confessed his own experiences that late Monday afternoon. He had smelled a powerful fragrance of roses, and he felt a light evening breeze caressing his face. He heard the voice of a woman giving him the message I reported above. At the time, he believed it was the voice of the Blessed Virgin Mary. It was only subsequently that he saw that woman in vision, and only months later that he learned her identity - the radiant nun. Mother Frances Xavier Cabrini.  The Holy Father came to Denver in 1993 for World Youth Day.

On Sunday, September 13, 1991, Josyp participated in a Medjugorje Marian celebration in Marmora, Canada. The large group completed the Stations of the Cross. Josyp had delivered his testimony, and then the group was blessed by the majestic display of the miracle of the sun. Josyp was overwhelmed. Over the months that passed, this became a favourite place of prayer. Large numbers of pilgrims would gather on weekends. September 1992, a year after the miracle of the sun, Josyp again joined the pilgrims as they wandered their way along the Stations of the Cross. At the second station, four young girls cried out to their parents that they had seen and spoken to the Blessed Virgin. At the tenth station, seven adults saw the Mother of God, among these, Josyp.

She spoke to him and appeared once more at the eleventh station. That same night, Josyp telephoned me around midnight. He related to me the words of the Blessed Mother. He called me a week later to tell me that the Blessed Mother appeared to him again in his prayer on September 18th. The following day, he gave me the written text of these messages. These were the first associated with events in Marmora. Periodically, Josyp would present me the collected texts. These messages form the principal part of His book "In the Kingdom of the Spirit".

As I read and translated the messages, I was struck by the concordance of Mary's messages with the words of scripture, entire passages repeating verbatim the scriptures of Revelations and the prophets of the Old Testament.

I have come to know Josyp well over these years - his childhood, his family background, the ministry in the Catholic underground. He has shared everything about his later life in prison and in the camp, the opportunities he had to study and to read. I know his reading habits. But these never equipped him with the ability to quote entire passages of scripture.

Josyp Terelya and I had met January 14, 1988. We had collaborated on the first video film, "Frontier of Freedom," produced and directed by John Bird to celebrate the Millennium of Kievan and Ukrainian Christianity. I became Josyp's mentor, a close friend, a spiritual director, and chief translator for his autobiography, "Witness," co-authored by Michael Brown. In the ensuing years Josyp has been invited to speak throughout Canada, the U.S.A., Mexico, Eastern Europe, England, Ireland, France, German, Australia the Middle East, the Philippines, and so many others, always as a witness to his Church and the voice of heaven.

Readers may find his reflections and messages disconcerting, to say the least. Josyp's views on the organized structures that work for evil are very straightforward, as are his ideas on the new ecumenism, his statements about the Jews, and especially his concluding remarks on the trial of Jesus and unique mission of the Jewish people in God's saving plan for all mankind. He has spoken about Islam, the tragedy of the twin towers, and so mch more.They are hard words, but they are also the words of hope and consolation. They are the words of one who has suffered in faithful witness to Christ and the Church. His books are statements of his Catholic faith, of his love and fidelity to Christ. They are the words of one who lives and works to build the Kingdom of the Spirit.

Josyp's spirit is best expressed in scripture in the Book of Revelation: "...when He opened the fifth seal, I saw under the altar the souls of those who had been slain for the Word of God and for the witness they had borne. They cried out with a loud voice: 0 sovereign God, holy and true, how long before you will judge and avenge our blood on those who live upon the earth. They were then given a white robe and told to rest a little longer until the number of their fellow servants and brethren to be slain, should be complete." (Rev. 6,9-11).

". . .therefore are they before the throne of God, and worship Him day and night within His temple... for the Lamb in the midst of the throne will be their shepherd, and He will guide them to springs of living water, and God will wipe away every tear from their eyes." (Rev. 7,15-17).

As an introduction to his ecumenical reflections I am including my English preface and introduction to his work  Soyedenaniye, ‘The Holy Churches of God, That They May be One’., with the original Russian text. As the rest of the work is translated, we shall include the entire English translation.

THE HOLY CHURCHES OF GOD…THAT THEY MAY BE ONE
Toronto, Canada, 2001

The author of this book is Josyp Jaromyr Terelya, well known in the west and in Ukraine.

He is a contemporary of those who have followed the current events of the ideological religious struggle, as it appeared on the pages of journals and newspapers during the period of perestroika. In the period of the establishment of national identities,  Josyp Mychajlowycz was known as the author of controversial publications that ended in bitter polemics. For those who have known him personally Josyp Mychajlowycz was never indifferent to national and religious issues. It is not by chance that his active collaborator on many occasions were A.D. Sakharov, Elena Sannykova, Fr. Hleb Yakunin, Fr. Demetriy Dutko, general Petro Hryhorenko, the poet Zynovij Krasivsky, Bishop Ivan Margitych, Bishop Pavel Wasylyk, Fr. Pavel Madiar, provincial of the Basilians in Transcarpathia, the poet FR. Yaroslav Lesiw, Alexander Ginsburg, Yuri Orlov and his close friend from Moscow Tatiana Truseva together with a number of personalities of the dissident movement, during the regime of the Communist Party in the Soviet Union

A difficult thorny path, yet a life of honour.
His efforts in the name of freedom, literally washed in the sweat and blood of the author.

The thoughts of the author about the union of Orthodox and Catholics elevate us to the spheres of the pure peace of an authentic Christian philosophy and history.  They introduce to the world of a peacemaker who has given his entire life for his people and his Church, a man who does not cease to think and work for the union of the holy Churches of God.

It is my honour and joy to become his spiritual director and friend.

The reader will find many surprising conclusions in his book; but they are always clear and convincing. The Church is the Body of Christ, Christ, its founder. Ultimately Christ is its transcendent head.

The underlying theme of this work, and its ultimate purpose, is its appeals to the sons and daughters of Orthodox and Catholic Churches, to abide in unceasing prayer for the unity of the Churches.

The words of this Ukrainian will be close to the heart of the Russian people that has suffered so much and whose literature has given us such a one as Fyodor Dostoevsky, the poet of suffering. How precious is the meaning of suffering reflected in the sufferings on the Cross of the Saviour, not only to individual men but to all of mankind. This is the underlying motif of the Russian soul.

Lastly even though many years or decades or even ages may pass before the desired day of the union of all Christian mankind in the One Holy Body of Christ – the Church - because of our sins, the prayer of a man of the Church will remain a testimony that a powerful voice rang out steadfastly to praise the only head of the Church, Christ, and His Holy Body – the Catholic Church,  yet to be likened to Him in His suffering and humiliation. Ours were the hard times of the XX century, times of unprecedented changes in the world, times of terrible criticisms of God and of Christ, times of the apparent triumph of hatred, anger and depression.